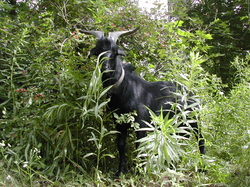 Home To  The Spanish Goats.
Spanish  Goat
Spanish goats  are very diverse and are derived from three
very different groups of goats.  Goats from Spain were brought to the New
World by Spanish explorers and settlers  in the 1500's and 1600's. They
were brought to Texas, New Mexico, Arizona,  California, Florida, Alabama,
Mississippi, and Louisiana, all of which were  originally explored and
colonized by Spain. English settlers brought Old English  Milche goats to
the thirteen original colonies in the 1600's and 1700's. As  Americans moved
west from these thirteen original colonies they took descendants  of these
old English goats with them. They were even taken into the states that   were already populated with goats from Spain. Both English and Spanish
sailors  deliberately released goats and hogs on islands along their routes  to establish  feral populations which would provide fresh meat on
subsequent journeys. In the  late 1800's and early 1900's the Swiss and  Anglo Nubian breeds of dairy goats  were imported into the United States
and distributed to all regions of the  county. All of these diverse types  of goats had some influence on the goats  which are commonly called Spanish  goats  of today. They were originally called  Spanish goats only in the  Southwest. They were called wood goats in Florida,  brier goats in the  Carolinas, hill goats in Virginia, and brush goats and scrub  goats in  other areas of the South. Today they are called Spanish goats  throughout
the United States. Spanish goats demonstrate greater parasite  resistance, survival abilility on not so good  forage.
Information from the spanish goat.org 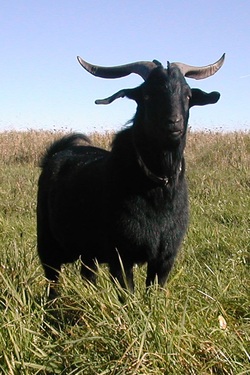 What Is a Spanish Goat?

A handful of ranchers and breeders in Texas and the Southeast maintained closed herds for decades; these are today’s true Spanish goats. Others in those regions outcrossed to other breeds to some degree, but the goats they produced are of interest to Spanish goat breeders, too; the old blood runs in their veins, so they’re prime candidates for upgrading programs.

The purebred Spanish goat is a very old landrace breed shaped by natural selection and geographic isolation, so Spanish goats vary from one region (and even one ranch) to another.

However, the American Livestock Breeds Conservancy, in conjunction with the Spanish Goat Association, established the following guidelines:

Head Profile is usually straight or slightly convex.
The ears are moderately long and usually fall horizontally, but close to the head, and alongside the face rather than out to the side. Long ears out to the side are more typical of a Nubian cross, which is a common cross with these goats.
Horns Usually long, on bucks they tend to flare up, out laterally and twist at the tips. The large size and lateral twist are very typical.
Body Spanish goats are usually somewhat rangy and large-framed, rather than compact and cobby. In select lines, the rangy frame is well-filled so that meat conformation is good.
Feet and legs The feet are usually sturdy with upright, strong pasterns. Legs are generally straight from front and rear view, with some tendency to be “cow hocked” (a conformational defect where the points of the hock are close together and the fetlocks are wider apart than normal).
Hair Coat Usually short; some have longer hair, especially on the lower body and thighs. Some lines produce heavy, cashmere coats.
Color All colors are acceptable. Some colors that occur in pure examples can resemble the colors in other breeds, but are no indication of crossbreeding unless accompanied by other conformational
evidence.

The Spanish goat is on the "watch" list with the American Livestock Breeds Conservancy  (http://albc-usa.org/cpl/wtchlist.html#goats) listing of rare and important animals.  We like them for their general stature, tight udders, strong hooves and beautiful coloring.  They are known to be hardy, good mothers, parasite resistant and self-sufficient on pasture.